Txiki Festival: A film festival for children...but not just for them! Launched in 2013 by Txiki Productions, the Txiki Festival – a film festival for children – today brings together over 2,000 attendees across four days in Biarritz.

For a week every autumn, the town of Biarritz hosts the Txiki Festival with screenings, audio-visual production workshops and creative activities.

The Txiki Festival aims to feed children's curiosity in a fun way through a its programme.

The Txiki Festival holds a competition where two panels of children award Audience Grand Prizes to two of the forty or so short films screened.

Just because we're targeting a junior audience doesn't mean that the projection equipment standards don't need to be as high as for an adult audience.

Baptiste Massaloux, Technical Director of the Txiki Festival, explains:  "We had the opportunity to carry out all of our screenings using the Epson EB-G7000W projector. This projector suits us perfectly because it is easy to use, powerful and bright."

The powerful brightness of the Epson EB-G7000W video projector is a characteristic that is essential in ensuring that the Festival runs smoothly.

This is, in particular, down to the specific audience that the festival is targeting.

"Thanks to this video projector, we can project in optimum conditions both in the dark and in bright light," Baptiste Massaloux adds.

Up to any task, simple to install

Epson's EBEB-G7000W projector is easy to position thanks to a range of motorised lenses, including the optional ultra-short-throw lens and horizontal and vertical lens shift.

The projector benefits from extremely versatile 360-degree installation, so it can be installed almost anywhere.

"We also use it for the closing ceremony during which we screen the films produced by our young festival-goers," Baptiste Massaloux continues.

High-tech, high-quality equipment provided by Epson to contribute to the education of the young audience and to the success of an annual event that has become unmissable.

"We are very happy to be able to count on technical partners like Epson, who put their cutting-edge technology at the disposal of children's creativity.

"Thanks to Epson, our budding artists can watch their productions projected on a big cinema screen," Baptiste Massaloux concludes. 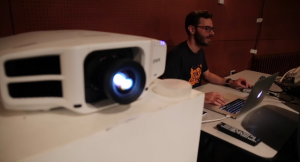